Biology 101, English literature, calculus, and . . . ethics? Emory’s Center for Ethics is at the heart of a range of efforts to infuse education here with an ethical sensibility, from the College to the professional schools—and far beyond the classroom. Story 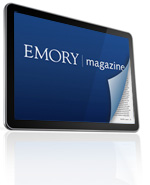 Now on the iPad

Get it in the App Store

Would you like to support Emory Magazine through a voluntary subscription?

Be Part of Emory Magazine

Colonel Ted Westhusing 03PhD wrote his dissertation on military honor and considered Iraq a “just war” in the ancient tradition, so he signed up—a decision that probably cost the West Point professor his life. Story

From Lab to Life

Startling breakthroughs in genetic engineering, nanotechnology, and synthetic biology are giving the newly appointed Presidential Commission for the Study of Bioethical Issues—vice chaired by President James Wagner—plenty to think about. Story

The Devil You Know

The digital revolution is transforming the way we work, play, and socialize, creating new connections and making worlds of information immediately accessible. But is there a dark side to the way people behave behind the screen? Story

The Choices We Make

When I was about fourteen—the age my son is now—I stole a pair of bowling shoes. Read more

“I am really proud to see Emory go across platforms, but most pleased with the content of your work.”—Peter Elmore 86C

Emory hosted a display of more than 1,400 panels of the AIDS Memorial Quilt on World AIDS Day, December 1. Presented annually by Hillel at Emory since 2005, the quilt’s panels tell stories of lives cut short by HIV/AIDS. Photo by Bryan Meltz.

The Campaign Chronicle is now part of Emory Magazine. Click on the stories above for the latest news on Emory's historic campaign.

Thanks to these advertisers in Emory Magazine.

Would you like to let our graduates know about your business, service, real estate, or organization?