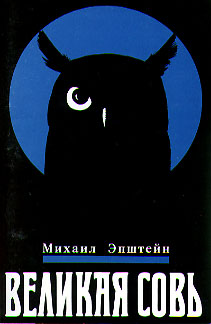 Comrades, we love the sun that gives us life,
but if the rich and the aggressors were to try to monopolize the sun,
we should say:
"Let the sun be extinguished,
let darkness reign, eternal night..."
Lev Trotsky, 11 September 1918
(Cited in André Glucksmann.The Master Thinkers,
trans. by Brian Pearce. N.Y. Harpers& Row, 1977, p. 211.)

The French critic Roland Barthes suggests that "the best weapon against myth is perhaps to mistify it in its turn and to produce an artificial, second-order myth." Great Sovia (an alternative English equivalent might be Great Owland) is an experimental myth, created in order to explore the deep patterns of Soviet mythological mentality.

Contemporary Russians often refer to themselves as "sovok," which has double meaning: "a Soviet man" and "an owl," including such allusive implications as "grave and solemn looking", "sharp-sighted, vigilant, wise," and "dull, obtuse." This is a story about a Northern people who believed the Great Owl to be their holy ancestor and so became owlish in their souls. The book discusses the habits and rituals of these people-owls and explores the nature of "owlism," which exposes the archaic and occult roots of the 20th century totalitarian systems. Various sides of the Great Owlish mysterious twilight life, such as the faith in angels, the discipline of vision and hearing, the construction of underground temples, the political institutions of "dawn" and "paradise" are interpreted in terms of totemic practices and beliefs. Finally the ruling "videologists" announce the owls to be non-existent nightmares of the "dark past," but the logic of owlish mythology still survives this self-denial.

Back to Mikhail Epstein Home Page