Society for the Study of Russian Religious Thought 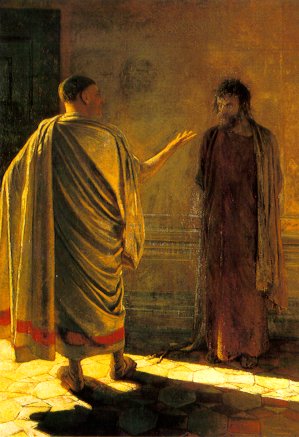 Nikolai Ge. What is Truth? (1890)
The Society unites persons involved in the study of Russian religious thought and its interaction with other spheres of culture. The work of the Society is based on the complete freedom of scholarly inquiry and does not privilege any particular confession or philosophical system.

SOCIETY FOR THE STUDY OF RUSSIAN RELIGIOUS THOUGHT

In Support of Interreligious Spirit and Democratic Values

Mikhail Sergeev, Secretary-Treasurer and Editor of the Newsletter

This project aims at collecting in one volume information about Russian technical religious philosophical terms and their different translations into English. It seems that such a work is needed because, on the one hand, some terms are now for the first time introduced into English language (translations of Aleksei Losev, for example) while, on the other hand, others have more than one established equivalent in English. For example, one of the most popular Russian terms Vseedinstvo is rendered in English as Total-unity, All-unity and uni-totality. The Glossary, hence, would systematize the existing data and present the options used in the translation of different Russian religious philosophical terms.

A separate entry of the Glossary will consist of:

"In The Philosophy of Economy Bulgakov may be said to suggest that the contemplation of 'economy', i. e., human beings acting in nature and nature in human beings, prompts intimations of the Incarnation, of the humanity of God (bogochelovechestvo)."
Paul Valliere. "Sophiology as Dialogue of Orthodoxy with Modern Civilization." Russian Religious Thought. Ed. by Judith D. Kornblatt and Richard F. Gustafson. Madison: The University of Wisconsin Press, 1996, p.182.

"But when both of these beliefs, the belief in God and the belief in humanity are carried consistently to the end and actualized in full, they meet in the one, complete, integral truth of Divine humanity."
Vladimir Solov'ev. Lectures on Divine Humanity. (Trans. by Peter Zouboff). Revised and edited by Boris Jakim. Hudson, N.Y.: Lindisfarne Press, 1995, p.24.

The Glossary is planned as a collective endeavour. Each member is welcome to contribute as much as (s)he can in accordance with the area of specialization and/or interest. The received material will be regularly published in the Newsletters of the Society.

Symposion. A Journal of Russian Thought

INTELNET (intellectual network) - a virtual community devoted to the advancement of interdisciplinary ideas in the humanities.